An excerpt from Mack Sennett’s Fun Factory by Brent Walker 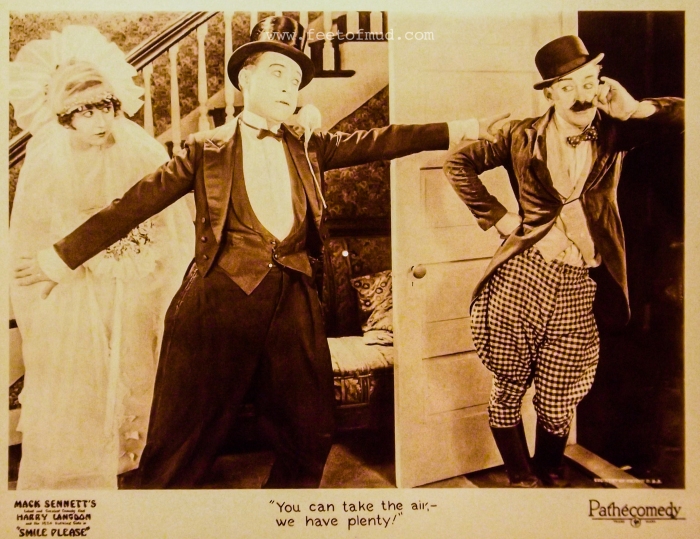 On November 9, 1923, Sennett signed Langdon to a lucrative two-year contract, prior to releasing his first comedy.  However, instead of Smile Please, the first Langdon Sennett comedy released by Pathé was Picking Peaches (initially previewed on November 27, 1923, and released on February 3, 1924).  Picking Peaches was directed by Erle C. Kenton, who had piloted several of Sennett’s features.

Kenton’s first Sennett Pathé comedy had been Inbad the Sailor (1923), a somewhat surreal seafaring comedy with Billy Bevan and Harry Gribbon.  This film, shot at the Angel’s Gate lighthouse at the end of the San Pedro breakwater, was later remade during the sound era as Lighthouse Love.  Kalla Pasha particularly excels as a tough lighthouse keeper who sees visions of Madeline Hurlock wherever he looks, causing him to crash into walls while attempting to kiss her apparition.  Inbad the Sailor also features one of the more outlandish visual gags every used in a Sennett film: during a boxing match, a cauliflower—which resembles a brain from a 1950’s sci-fi film—is seen floating into Gribbon’s ear, leaving him with a cauliflower ear (Lord using a visual gag to illustrate a verbal pun).

Kenton’s Langdon film, Picking Peaches, did not feature the completely formed Langdon character, but still there was every indication that Sennett already believed he had quite a find.  To promote the film, a press release was issued that demonstrated Sennett’s awareness of the magnitude of Langdon’s potential talent:

Charlie Chaplin’s discoverer Mack Sennett has made another find in Harry Langdon.

Sennett’s announcement years ago that he had discovered the world’s greatest screen comedian was not taken seriously, until Charlie Chaplin’s appearance on the screen vindicated all of the Comedy King’s extravagant claims for him.

Since the inception of Chaplin’s pantomime action, there have been no discoveries in the line of comedians of any noteworthy importance until the present.

Mack Sennett lays claim to the fact that he has made another important find, and the only real competitor to the famous Charlie, in the person of Harry Langdon.  Sennett goes so far as to say, “he is Chaplin’s equal.”  Who should know better?

On the surface, Langdon might have seemed ill suited to work at Sennett.  His slow, deliberate comedic style was the direct opposite of the exaggerated, frantically paced action that was Sennett’s hallmark.  Yet it was this contrast that made Langdon stand out, perhaps more so than had he worked at Christie or even Roach.  Perhaps the most underrated aspect of Langdon’s Sennett two-reelers was how he played opposite his supporting cast.

The ridiculously imposing Ward would be a frequent participant in early Langdon films, and in Smile Please he is afforded a rare opportunity to show his comedic gifts.  After menacing Langdon, Ward realizes he has made a mistake and apologizes to Harry profusely.  Ward then hikes his belly, smiles at the camera and stomps off.  Though Langdon would later be reunited with Vernon Dent on occasions during the sound era, and would work with some talented performers in his First National features and sound shorts, he would never again have the same high level of ensemble supporting players to play against after leaving Sennett in 1925.

If you don’t have a copy of Brent Walker’s Mack Sennett’s Fun Factory yet, make sure to pick up a copy here.