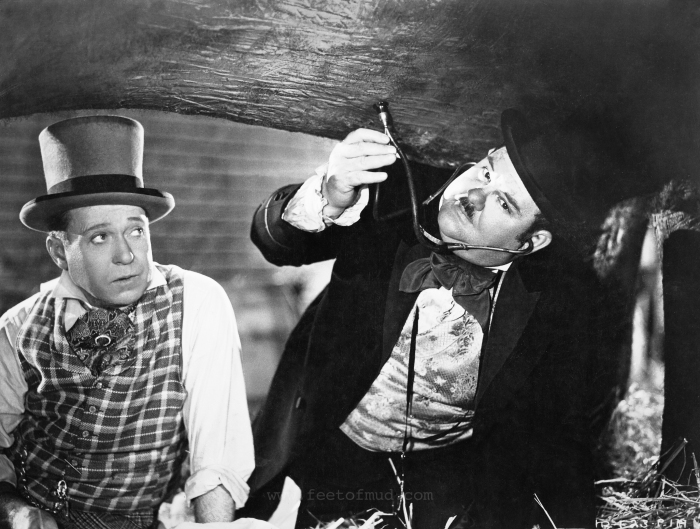 Hollywood, August 17, 1938 (U.P.) – Stan Laurel, pickle-faced little screen comic, Wednesday was given his walking papers at Hal Roach studio which immediately signed Harry Langdon to form a new team with rotund Oliver Hardy…  The new team of Hardy and Langdon, according to Roach, will do only full-length features.

By the summer of 1938, Hal Roach was a man of huge artistic aspirations and very little patience for the “pickle-faced” comic who thought he knew more about filmmaking than Roach did.  He had already abandoned the two-reel format and jettisoned short subject stalwarts Charley Chase and the Our Gang troupe.  Laurel & Hardy (and good old reliable Patsy Kelly) were the only reminders of his slapstick past.  And Roach considered them expendable.

Roach had ended his partnership with MGM, who seemed to merely tolerate his non-Laurel & Hardy features in order to ensure a steady stream of bankable product from the popular duo.  Roach’s new distribution deal with United Artists would free him to establish himself as a serious filmmaker.

To United Artists, however, Laurel & Hardy were part of the deal.  Unknown to UA, Roach was now without his most marketable commodity.  United Artists couldn’t have been happy.  Their arrangement was to include a certain number of Laurel & Hardy comedies and suddenly – poof! – no Laurel.  The Roach/UA publicity machine would have to go into high gear to convince exhibitors, audiences (and themselves) that Langdon & Hardy was somehow preferable to Laurel & Hardy.

The teaming of Harry Langdon and Oliver Hardy received a lot —a lot— of press.  The permanent split of Laurel & Hardy seemed like a done deal, with Harry stepping in to bring his own childlike innocence to the role of Ollie’s sidekick.  Laurel was out, Langdon was in – for good. 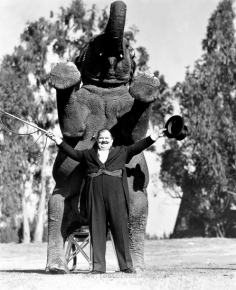 Here was another opportunity for the newspapers to print more stories about hopeful, hard-luck Harry.  He was in the ultimate catch-22…  cautiously optimistic about what a pairing with Oliver Hardy could mean to his career, and very aware that, ultimately, he was no replacement for Stan Laurel.  “Stan got me my writing job here at Roach’s.  I never dreamed that his partnership with Oliver Hardy would be broken…  I honestly hope they’ll patch things up, even if it means Hardy and I won’t play in a picture together.”

So in Zenobia Harry isn’t emulating Stan, he isn’t even the vacuous Harry of old; as sideshow medicine man J. Thorndyke McCrackle he’s putting his own slightly dim spin on W.C. Fields (aka Eustace P. Mc- Gargle).  He even performs a patented Fields’ gag lifted from The Old-Fashioned Way: hawking his curative elixir, McCrackle’s voice devolves into a raspy whisper until, swigging from a bottle of the snake oil, he’s able to bellow out his sales pitch at full force.

Langdon and Hardy share very little screen time together.  Rob Stone, in his excellent book on the boys’ solo films, ‘Laurel Or Hardy’, makes the interesting observation that Hardy was saddled not with one Laurel replacement, but with three: Langdon, Stepin Fetchit and Billie Burke.  (On viewing, Billie Burke’s performance as Dr. Tibbett’s flibberty-gibbet wife is scarily similar to Stan’s portrayal of Mrs. Hardy in Twice Two.)  So the film belongs to Babe Hardy, delivering an amiable variation on his own personality, as a courtly Mississippi doc more concerned with following the tenets of the Declaration of Independence than feeding sugar pills to hypochondriacal matrons.

The big slapstick scene involving the new team revolves around Dr. Tibbett’s examination of the ailing Zenobia.  The expected mayhem ensues.  Zenobia crushes the doctor’s top hat, later she crushes the doctor himself; she blows the hat off Tibbett’s head, wallops him with her trunk, and lifts him high over her head.  There’s even time for Tibbett and McCrackle to reenact a gag from Block-Heads:

McCrackle: “Hello, how are you?”

With the examination over, McCrackle expresses his thanks to the good doctor with an unnecessary comment on Tibbett’s heft.

Tibbett: “Yes, but I’m not an elephant!”

McCrackle: “No… well… not exactly…”

Stan and Ollie they’re not.

So the grateful goliath follows Tibbett everywhere for three reels, embarrassing his family, discomfiting the oh-so-import Carter family, and driving McCrackle to sue Tibbett for alienating the affections of an elephant.  Harry has some good scenes in the courtroom, leaping to his feet to recite his overly rehearsed speech (“In the first place, Zenobia and I…”) and breaking into his sideshow spiel at the slightest provocation.

All’s well that ends well, of course, and as with There Goes My Heart, the fadeout belongs to Harry, strolling off into the horizon and waving to the audience as the end music swells. 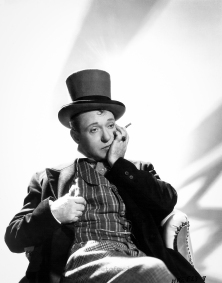 The critics were genuinely pleased to see Harry back, and the reviews were optimistic if not overly enthusiastic.  The New York Times embraced Harry’s comeback: “Harry Langdon’s pale and beautifully blank countenance (as the elephant’s owner who sues Dr. Hardy for alienation) has probably already excited the artistic jealousy of Mr. Laurel.”  Meanwhile, Variety cautiously anticipated the pair’s next film: “Langdon has but a few moments to work with Hardy, so an estimate of their work as a team must wait for future pictures.”

But future pictures never happened.  Zenobia couldn’t live up to the hype, and audiences were wise to the ruse.  It didn’t take long to sound the death knell on the Langdon & Hardy team.  On May 13, 1939, just a month after Zenobia’s release, Motion Picture Herald announced that Laurel & Hardy were back together.  Langdon was out, Laurel was in — for good.